the new king was going to marry the emperor’s daughter

he saw words appearing and studied them 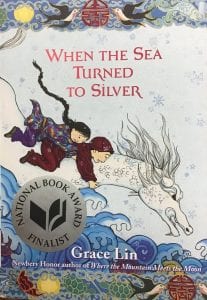 My class is reading When the Sea Turned to Silver by Grace Lin. Pinmei lives on a mountain in China with her grandmother, Amah. Their friend, Yishan, lives higher up the mountain. The Emperor, the Tiger Emperor, wants a Luminous Stone, but nobody knows what it is or how to get it. I can’t wait to read more!